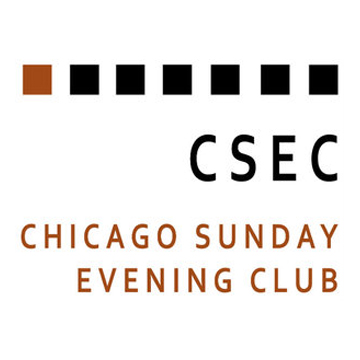 The Chicago Sunday Evening Club (CSEC) was founded in 1908 as a ministry of and to the business community of Chicago. From its founding through the mid-1950s, the most visible aspect of the CSEC was a weekly Chautauqua-style event held from October to May on late Sunday afternoons in Orchestra Hall. While not a church service, these evening gatherings were framed in a liturgical style, and featured a full choir and often a sermon, in addition to an edifying message delivered by a local captain of industry or notable philanthropist. The CSEC was an early adopter of radio, and was featured in a coast to coast broadcast called The Nation’s Pulpit. In 1956, the CSEC became WTTW’s first local customer, eventually moving the Sunday evening event from Michigan Avenue to a studio at Channel 11. Over the years, the structure changed, and eventually became the well-known half-hour program 30 Good Minutes, which aired both locally and nationally. In the 21st century, the CSEC has begun a shift from a format of “faith in reflection” to one that now seeks to engage our audience at the level of “faith in action.” To that end, we have begun a series of projects around core issues facing the city, creating a variety of media and live events to engage people of faith in an active search for common solutions to our common civic problems.

Briefly put: We tell stories that inspire people to put their faith into action to make Chicago better.
Though we bear the name “Club,” we have no official membership, apart from those who wish to freely gather to participate in our programs. We are a registered nonprofit corporation governed by a fourteen-member board. In accord with our origins, the board has traditionally been been made up of business leaders, not clergy. We currently have a staff of four, augmented by a small army of freelance contractors and wonderful volunteers. The CSEC has a long track record that brings together live events and cutting edge media around discussions that are central to the moral and religious life of Chicago. Just as we were early adopters of radio and television in years past, we have embraced the new media of the 21st century (such as web-based video, social media, and podcasting), making us particularly suitable for carrying out engaging, innovative dialogue and interaction around core civic issues.

The Sunday Evening Club maintains a broadcast archive of over thirty years of legacy television media. This archive comprises the largest collection of sermons and reflections from the 20th century’s greatest preachers to be found anywhere. We work with this archive on a weekly basis, making its contents available on the web to both longtime viewers and new audiences.

In addition to this archive, we have been actively developing new programming since our re-launch in 2013. These include radio programs, podcasts, and a variety of regular live events.

The most unique learning opportunity we offer is the chance to work behind the scenes to help move these many different events and programs from concept to production. We are master storytellers, and one of the most important skills we teach is how we go about crafting our stories for our various platforms and audiences. It is difficult and very rewarding work.

We work with a variety of production tools in our office. These include a number of professional-grade software platforms used for audio and video recording, editing, and distribution. We also regularly utilize software for photography and graphic design for a variety of printed products.

It is our hope that field education associates would come with at least a basic familiarity with some programs of this type (even playing around a bit with GarageBand gets you in the ballpark), as well as an eagerness to learn new skills with these platforms.

A lot of our work also includes daily and weekly implementation: we upload, manage, and archive a great deal of media content each week. It’s truly tedious, but it must be done (or chaos wins), and all staff pitches in. We would expect our field education associate to take part in these activities with care and attention to detail.

The landscape of ministry is changing in the 21st century. As has been noted by The Christian Century and other publications, many who are in seminary today can expect that they will find themselves in bi-vocational ministry at some point in their careers. Rather than cling to old models of the pastorate, the way to thrive in this new reality may well be to embrace the opportunities offered by an expanded palette of responsibilities.

The Sunday Evening Club was founded on the concept of bi-vocationality. It is a ministry founded and run by business persons. It has been an intentional part of our structure from the beginning that clergy were not the leaders. This has opened tremendous opportunities for participants in our programs to explore the integration of faith and working life.

Our current staff consists of persons who have each moved several times in their careers. Our president is a former pastor and college professor. Our vice-president is an ethicist who chose to leave academia to work in media reform. Our office environment encourages exploration of vocations and supports the growth of our staff as they explore and learn new skill sets.

None at this time.

We are an organization in a state of transition. We are still defining our new work and mission for the 21st century.