CHICAGO–Chicago Theological Seminary (CTS) is excited to announce the awarding of the Rabbi Herman E. Schaalman Interreligious Leadership Award to Leo Wolters Tejera, which will be officially awarded at the André LaCocque InterReligious Lecture on March 15, 2022. The award is presented by the InterReligious Institute at CTS. 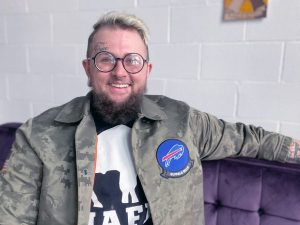 Leo, ​​a second-year Masters of Religious Studies major with a concentration in Interreligious Studies, currently lives in the town of Olean, a small rural town in southwest New York. Their project proposes an interfaith/interidealogical lawn sign campaign in their town that would play on current community awareness of intersectionality. They will purchase and distribute 300-500 lawn signs bearing the words, “There is no them, only us,” to local community members, businesses, and organizations that agree to participate. In tandem with this, Leo will launch an op-ed campaign in Olean’s local and regional newspapers; this campaign will contain writings from each sector that was maligned by a local pastor/principal that reflect the central theme.

Leo receives $500 honorarium, as well as a $500 micro-grant to get their project started.

The Schaalman Award is named for Rabbi Herman E. Schaalman, who was born in 1916 in Munich, Germany. As a child, Schaalman endured instances of anti-semitism, intolerance and exclusion. In 1935, he managed to evade the advance of the Nazis and the Holocaust by enrolling in Hebrew Union College in Cincinnati, from which he was ordained in 1941. He additionally completed his B.A. and M.A. at the University of Cincinnati in 1937, attending both schools concurrently. His ministry took him to Cedar Rapids, IA, and, later, Chicago, where he would spend the rest of his life. In 1956, Schaalman was named Senior Rabbi of Emanuel Congregation of Chicago, a position he held for more than thirty years, after which he remained Rabbi Emeritus until his death.

Schaalman is widely known for his interreligious activism. He advocated for constructive dialogue, believing that interreligious friendships could improve and heal the world. He had a close relationship with Roman Catholic Cardinal Joseph Bernadin of Chicago, for whom he performed a memorial service after Bernadin’s death in 1996. The Rabbi Herman E. Schaalman Interreligious Leadership Award was established in his honor in 2000.

Leo Wolters Tejera resides in Olean, NY, with their wife Elle, and their five children and four animals. Leo and Elle own WT Hair, an inclusive and intersectional salon that focuses on using their technical skills to help others find their own agency and beauty. With a previous career in social work and a near full-time involvement in local social justice and advocacy work, Leo is passionate about taking their education and using it to practically engage with the world to build a greater sense of solidarity, equity, and justice.

About CTS
Since its inception, CTS has lived on the edge – literally and figuratively. Established in the boomtown of Chicago in 1855, the Seminary’s first mission was to train church leaders on what was then America’s western boundary. Throughout our history CTS has been a leader in theological education, social justice, and societal transformation. Learn more at www.ctschicago.edu.