“Dr. Ray brings an incredibly deep understanding of the changing cultural and religious landscape facing theological education. His 30 plus years of experience equip him not only to see the challenges, but to identify and articulate the possibilities ahead,” said Norman J. Williams, chair of the Seminary’s board of trustees. “I am convinced that his clear strategic vision will lead to new opportunities for CTS. We are excited to expand the seminary’s capabilities and build on Dr. Hunt’s contributions.”

A renowned theological scholar, Ray is no stranger to CTS, having served as visiting professor in 2013. His appointment has been met with enthusiasm across the seminary world and by theological leaders and the United Church of Christ (UCC) where Ray is an ordained minister.

“Having worked closely with Dr. Ray, I am thrilled to learn that Chicago Theological Seminary has called him as their next president,” said Rev. John C. Dorhauer, UCC general minister and president. “He brings a solid foundation of theological sophistication and a deep awareness of emerging racial, political, and cultural realities. He knows where theological intersections with culture and politics matter – long a hallmark of the kind of leader CTS has cultivated throughout its history,” noted Dorhauer. “He will make the alumni/ae proud while inspiring a whole new generation of visionary and prophetic leaders too often in short supply these days.”

Dr. Ray thanked the Seminary’s search committee and board of trustees, and promised to devote his passion and voice to serving its mission and constituents.

“It’s a tremendous honor to be selected to head the prestigious Chicago Theological Seminary. I look forward to working with the board, talented faculty, staff, students, and alumni/ae to further our critical mission of preparing Leaders for the Next. We are committed to developing citizens of the future who unabashedly, and unashamedly champion justice, mercy, and the inherent value of every human being,” said Dr. Ray.

“Alice Hunt moved CTS forward with her commitment to innovation. Her inspirational leadership led the Seminary to think differently and execute new models,” continued Dr. Ray. “Theological education is at a critical juncture, amid downward trends in enrollment, and unconscionable burdens put upon those taking on student debt. Yet, I am certain that we have the tools necessary to confront these challenges and seize the opportunities facing theological education, its institutions, and the students we serve, to make our religiously plural world wiser, more merciful and just than ever before.”

Prior to being called to lead CTS, Ray served as the Neal F. and Ila A. Fisher Professor of Systematic Theology at Garrett-Evangelical Theological Seminary, related to the United Methodist Church and located on the campus of Northwestern University in Evanston, Illinois.

Well known for his articles on Christology, race, and the Black experience, Ray is also author of Do No Harm: Social Sin and Christian Responsibility, a contributor to Constructive Theology: A Contemporary Approach to Classical Themes, and co-author of Black Church Studies: An Introduction. He is president of the Society for the Study of Black Religion; past co-chair of the Workgroup on Constructive Theology; and served on the executive committee of the Black Religious Scholars Group. Ray serves on the review boards of Conversations in Religion and Theology and Westminster/John Knox Press; and is member of the American Academy of Religion.

The search for a seminary president was launched last February following the decision of President Hunt to retire after 10 years of service. The board named Donald C. Clark, Jr., counselor at law, entrepreneur, retired general counsel for the UCC, and past CTS board chair, as acting president. 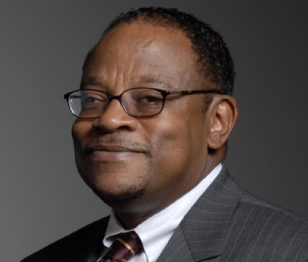