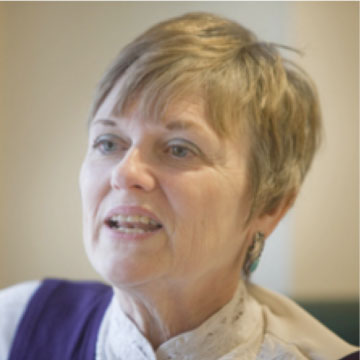 The Rev. Dr. Beverly Dale is a Christian clergy who is a feminist and straight ally and talks about God and sex…a lot! She teaches an inclusive, science-friendly and sex positive Christianity that focuses on sexual diversity, pleasure, and freedom to help people be responsible and ethical in their sexual decision-making. Ordained in the Christian Church (Disciples of Christ) and currently serving as minister-in-residence at United Christian in Levittown PA, she has published several articles and poems and has spent most of her thirty years of ministry helping people reconnect their spirits and their bodies and confronting sex-negativity in the church and culture. In addition, she has written and produced a one woman show at several Fringe Festivals called An Irreverent Journey from Eggbeaters to Vibrators. “Rev Bev” can be seen in her “Sex is Good” videos and her body-positive sermons are on YouTube. She has a 4-part webinar series titled “Reading the Bible With Sex-Positive Eyes” and is currently completing her spiritual/sexual memoir, Sex Without Apology, Becoming a Sex-positive Person of Faith in a Sex-Negative Culture.

After working at the University of Pennsylvania for 21 years, the last 3 specifically on body justice issues, that was focusing on hook-up culture and what that was about and how students were experiencing it. Then in 2012, I started the Incarnation Institute for Sex and Faith in order to teach a sex positive Christianity that was inclusive and science friendly. So I am doing programming and workshops and beginning to teach classes, particularly focusing classes on theologian types who are who have at least one year of seminary and sexologists who have at least one year of sexuality education training. The workshops are geared much more to sexual freedom activists, people who are leaders in alternative sexual communities, that kind of thing.

What was it about CTS that made you want to attend?

I had a really good financial deal worked out with the University of Chicago, but realized that I didn’t want to be a theologian or an academic, I wanted to be a pastor. So, I walked across the street to Dick Lewis, who was the registrar at the time, and I said this is where I want to go, you gotta help me with the finances. And he came up with the money in a scholarship. So, what attracted me to CTS was clearly the pragmatic focus of theology, it has to be lived out in how we address oppression and repression and injustice. That the most loving thing has to be carried out in our actions, and that’s what I felt like CTS was preparing pastors to do.

How would you say your experience at CTS informed your ministry?

I was primarily influenced by Robin Scroggs who had just come out with The New Testament and Homosexuality. And he also introduced me to Virginia Mollenkott, and Susan Thistlethwaite and Dorothy Bass plugged me into the feminist theologians. I really wanted and appreciated the experience of taking courses in other seminaries as well. I had been burned in my young adult years by fundamentalist Christianity that said there was only one way about thinking about the Bible. So, I really appreciated being able to take classes at the Lutheran and Catholic seminary, and McCormick, so I took full advantage to make sure that I was getting a breadth of academic training. I think Phil Anderson’s classes on gestalt therapy, and his focus on experiential learning and getting in touch with ourselves as pastors has been very helpful in this work as I address some of the sexual wounding out there. To be able to get at healing, is not through analyzing and rationalizing and three points and a poem. We have to get at what’s happening in people’s bodies and in their life experiences using poetry or artistry or even storytelling and drama. This bypasses some of the defenses that we put in place. So, I think that Phil Anderson’s courses helped me a lot with this strategy.

Is there a transformative experience you can share from your time at CTS?

Yes, but it is sadly a critique about the direction the seminary is going.  So much of the learning and the experiences, the healing, came about through the relationships with those of us who were living in the dorms of Davis and McGiffert. So, after hours, after class, after we had done all of this theological reading, we would go to the U of C ice cream shop, or go to our favorite bar and we would talk theology and share our lives. That kind of significant relationship support helped me through a very trying time, my marriage was falling apart at the time. I found studying theology and going to seminary can be very traumatic for one’s faith. So much is being challenged that we really do need to have those relationships in place that can support us through all that learning and growing. So, as campuses, I understand that seminaries across the country are really moving toward online, but that really cuts into the ability for students to create those kinds of support networks of others who are going through the same thing. This was very powerful for me since I had a support community in Chicago and then I had a group of folks downstate who had no clue about what was happening. As a weekly commuter, I was really living in two different worlds. And if I hadn’t had that student support, I don’t know that I could have made it through the most difficult time of my life!

What are some words of advice to a student who’s looking to form that kind of community at CTS?

Institutionally, when I was there, the school provided a week-long experience led for the most part by Phil Anderson– I forgot the name of it – that was intended to develop deep sharing time and took seriously that this was going to be a part of student psychological growth. So, I’m sorry that the institution has stopped doing that. I would advise students that your faith will be challenged, and that you will come out of this seminary experience a different person of faith, and you will probably go through the “dark night of the soul” multiple times. Given that, you need to seek out people in your classes, or even older students, who are going through the same thing with the intentional purpose of sharing what’s happening for you.

Can you tell me a bit more about your work on sex positivity?

Well, it’s fairly new, and the organization is still finding financial support. But it got started out of my own personal story, my life story. My sexual ignorance and experiencing sexual abuse as a child impacted my ability to be in healthy sexual relationships. It impacted my ability to be intimate. In order for me to be psychologically whole, I had to deal with the silence or the shame that I heard from the Church for being a woman or a sexual person. And, for me to be spiritually whole, I also had to deal with the reality of the psychological damage which meant lots of therapy. So, that intersection of spirit and healing influenced my ability to say look, other people who are going through similar journeys as mine, so I can look back down the road and tell people this is the path I’ve found to healing, and you might find it that way too. While in seminary I had to decide whether or not to remain a Christian, or whether or not the Church had any good news for women, or good news for anyone who wants to be sexual, or anyone who wants to enjoy sexual freedom. And I decided that I can, and I do, and that’s what I teach. And I am bucking 2000 years of misogyny, and sexism, and sexual repression. But there have always been pastors and theologians who have understood the incarnation this way, but they are not the ones who currently have the airwaves now.

How has that changed over the years for you?

In the beginning, I think it’s common that everyone has to deal with their own personal stories and personal pain. The reality is and the growth is we begin to see how our personal stories (of sexual dis-ease) are shared and common with so many other people. To the point now that I totally believe this sexual wounding is playing out publicly in our politics today – so this has policy ramifications to it. That sexual ignorance is on grand display in Congress. Or even in presidential candidates if you will. We could easily be far more repressed in the coming decades than we were in the 1950s if certain people continue to make laws or if sexually wounded people get in the White House. So, that means that there is an urgency for the Church to take erotophobia. We must get out of our safe little rut, I’m talking to liberal churches here, of saying “Oh we welcome gays so now we’ve done our work and are sex-positive.” No, we haven’t done our work. There are so many sexually wounded people and they happen to be married, they happen to be not wanting to get married but not wanting to be celibate, they are not straight or fall into a gender binary. Certainly, Black Lives Matter is connected to how we treat bodies, and we treat bodies very badly in this culture – especially those of color, especially those that don’t fit into certain gender or sexual boxes. Racial and sexual stereotyping is all part of what body injustice is about. So, how I have changed? I have lifted my eyes from my myopic vision from my own personal sexual pain, and have seen that “the field is white for harvest.” This is indeed a mission field. We address the sexual ignorance and repression that is grounded in erotophobia because it’s entrenched in our political and social systems. And I’m assuming you can read my subtext; the way the Republican party wants to control women’s bodies and control women’s access to power, control gays and lesbians, and control those bodies that happen to be from different faith paths. There are very clear legislative agendas that are detrimental to our body and our sexual selves.

I would like people to be aware of the need for this work and become partners with us. Folks can learn more from our website: IncarnationInstitute.org or BeverlyDale.org. There are very few of us inside the church who are working on the issue of erotophobia – of teaching the truth of incarnation that we are spiritual beings having a sacred and spiritual existence in these sexual, sensual bodies – and that this is good. Church folk and religious professionals need to know that there are lots of people who consider themselves secular and post-Christian who really want to be (sexually) moral. They have not forgotten the beloved teachings of Jesus as key and important, yet they are so turned off by the repression and expectations of sexual homogeneity they hear from the Church, that they no longer can find any good news in Christianity. But when the church, that is, mainline liberal progressive churches, begin to realize and respond to the realization that people are hungry for some good news about sexuality – without the catch of monogamy or marriage – and offer a teaching that has its roots in justice, instead of conformity, we’re going to have a revolution on our hands. I consider myself a public theologian who is a part of building that movement, and I welcome anyone who would like to join me.